What's in Your Future? A Look at the Past Half Century of Changes 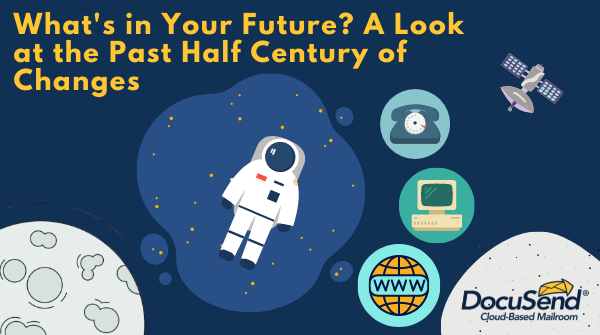 Life looked a lot different five decades ago. In 1969, you had to dial phone numbers you looked up in a book provided by the phone company. Calling people who lived out of town required a bank loan if you talked too long. And no one knew what an email address was. Not even Al Gore.

A half-century later, technological advancements have put a computer in practically every home, cars drive themselves, and everyone over three years old needs a smartphone.

Many of these changes would not have been possible without the invention of the modern internet. Yes, the old www, the World Wide Web, the ecommerce highway. When it was first introduced in 1991, little did we suspect what an enormous impact it would have on coming generations.

By now, many of us take the extraordinary power of instant access to information for granted. That’s a little dependent on what generation you happen to be in, of course. But the potency of having these internet tools at our fingertips means we no longer spend long hours at the library combing through their encyclopedias and periodicals (remember the microfiche reader?) to make ourselves and others brainier, shrewder, or just plain happier.

Without the Past, the Future Has Little Relativity

We’ve all been there. You can’t appreciate what it’s like to be up until you’ve been down, right? One can’t truly enjoy an eighty-dollar steak unless one has downed a few greasy cheeseburgers first. Better to drive a 1991 Yugo before test driving a new Rolls Royce.

OK, enough of that.

No matter what your chronological age, life is much different for people and businesses than it was fifty years ago. Hopefully, most of us get wiser as we get older by learning through our experiences. My wife tells me that if that’s true, I should be wise enough to be a genius by now. Don’t be fooled. Not everybody gets wiser as they age. Unlike ignorance, intelligence has its limit.

A Reminder of How We Got Here

Using data from the US Census Bureau, the Bureau of Labor Statistics, news reports, and Stacker.com, here’s a list of some of the ways our lives have changed over the past fifty years. And there’s a little tidbit at the end about what I learned from it that I hope might help a few people, particularly small business owners.

How Life Has Changed in the Last 50 Years

What Do We Need This Information For?

Not everything is better because of technology. Some things were actually simpler to do fifty years ago.

It was easier to meet new people because people didn’t rely on their phones to communicate. In the age of the smartphone, meeting someone organically can be much more difficult. But fifty years ago, it was practically the only way to make a new acquaintance.

You could choose to stay off the grid fifty years ago. With social media, geotags, GPS, and electronic financial transactions, it’s pretty difficult to delete your digital footprint nowadays.

Working was more personal when it was less reliant on technology. Without question, our lives have benefited overall, but some are so reliant on tech, they send emails to colleagues they work in plain sight of.

Air travel didn’t require the TSA, and getting through security was a breeze. You could take a lot more items on a plane. Even scissors and baseball bats were allowed, and people didn’t have to worry why.

Political issues now spring from social media. Russia placed 3,300 ads on Facebook to sow discord during our 2016 elections. And they followed up with hundreds of fake Facebook pages featuring those very ads.

Before the 1970s, most families had only one income. Today, more than 60% have a dual income.

Technology and the Future: Where Do We Go from Here?

My grandmother used to say: “You can understand life better by looking back at the past, but to live a good life, you must look forward to the future.” And that says it all, doesn’t it?

So here we go into our future, using technology to shape it and make it better!

The bottom line here is that technology has drastically improved the overall quality of life. It has undoubtedly made our day-to-day tasks much simpler and more hassle-free. The more it advances, the more information is available to improve our lives. Innovative software and advanced technology, when used wisely, help us break bad habits and establish better ones.

Fifty years ago, it was difficult to acquire information without looking through multiple books to understand even the most rudimentary concepts of the answers we were seeking. There is no question that the vast amount of information easily available on the internet enriches every aspect of our lives.

To name a few of them:

Better medical procedures, identifying and kicking bad health habits, longer life expectancy, more efficient and reliable machines, safer air travel, and the ability to better feed the world’s growing population. The important thing to remember is that we need to make the right choices to use technology to our benefit. And that’s not always as easy as it sounds.

Be discriminating between technologies that work to your advantage and ones that should be rejected. If you think that requires some thought, you’re right. But it will pay off. I guarantee it. My own small but worth-mentioning contribution is DocuSendAll it does is save SMB owners from spending hours doing the menial tasks associated with manually mailing their invoices. But if you spend those hours with your kids or taking your spouse to dinner or making your business grow, then it must be the kind of technology that makes our world just a little better. Try it and let me know what you think. It was invented by a wonderful team of experts that had your business in mind. It’s the best cloud-based mailroom service out there.