Why Do Americans Love Their Postal Service? 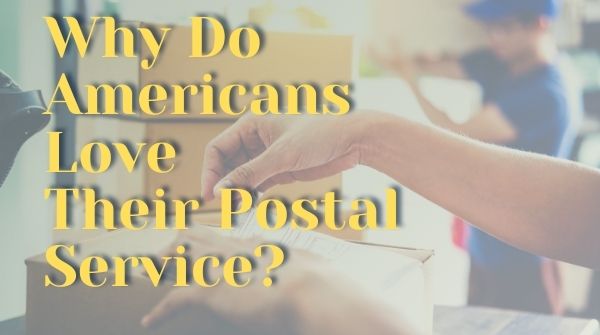 The United States Postal Service employs 617,000 workers in the United States. That’s the core of the $1.6 trillion U.S. mailing industry that employs more than 7.3 million people. That makes the Post Office the third largest civilian employer in the country, only behind the federal government and Walmart. Those hundreds of thousands of postal workers all work together to deliver medications, checks, food, and other essentials right through this horrendous pandemic.

Even so, some people still don’t seem to comprehend how critical the founding fathers thought the postal service was to the country’s burgeoning democracy.

This designates the Post Office as one of the definitive and absolute institutions in American history. And ever since Article I, Section 8 was ordained every government authority has protected it under the constitution. Until now.

But moving on, why do Americans love their postal service so much? Recent polls reflect an unimaginable 91% approval rating, the highest rating of any government institution ever. The reasons are many, but here are just a few of the most important ones:

The folks at the Post Office operate with no taxpayer money, travel thousands of miles to deliver an envelope for less than fifty cents, and virtually never shut their operations down.

But the Post Office is not merely symbolic of how a free society should provide essential services to its citizens. It also represents how we need them to protect our very sense of community that makes us a democracy. It is what connects our neighborhoods, districts, villages, towns, hamlets, and cities together.

Here’s a little story as an example of how sometimes the USPS is a service that makes us all grateful, and they are a service that will be there forever.

A young postal employee working at a small rural post office in the Midwest was sorting through some envelopes and came across one that was addressed:

Upon opening the undeliverable envelope, she found a letter from a little old lady who told God that she had never asked him for anything in her life, but she was desperately in need of $100 to buy Christmas presents for her grandchildren. She wondered if God could send her the money.

Well, the young postal worker was so deeply touched by the letter that she took up a collection among her coworkers to try to raise the $100. After managing to collect $90, she mailed it to the return address on the envelope, feeling pleased for being able to help.

A few weeks passed when another letter came addressed to God from the same little old lady. It read:

Thank you for the money. I deeply appreciate it. However, I only received $90 of the $100 you sent. Those bandits at the Post Office must have stolen the other $10''

So, decide for yourself if the Post Office deserves your respect and support. Please share your comments below. We’d love to hear from you, and so would the all the great workers at the Post Office.

United states postal services is too much awesome and they re respect your every customer not just me. I am mostly visit the post office for post the uk best essays review notes then seeing that they are everyone treat like VIP customers.