Will Your SMB Survive the Unexpected? 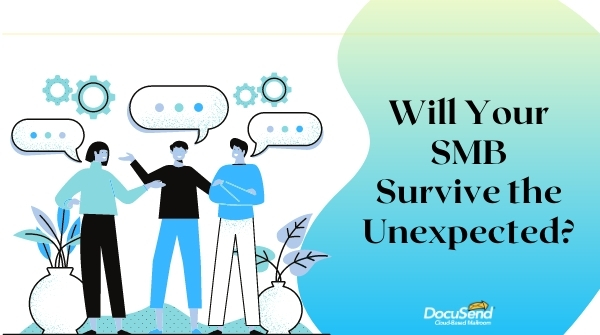 As teens, one of my brothers and I borrowed our oldest brother’s canoe when he wasn’t around to ask. We took it to a creek a few towns over just after the Spring thaw. The creek was at flood stage that time of year, but we were proud of ourselves for holding our own in some decent whitewater. When we came to a calm place we figured we could relax a bit. It was next to an old building, but we didn’t stop to wonder why anyone would put a pond right up against a building. Maybe they wanted to fish right out their kitchen window?

Some of you have an inkling of what’s coming, right? 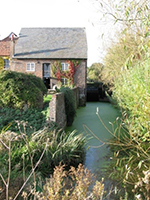 After a few leisurely strokes, the canoe started picking up speed. Suddenly we realized we had crossed what was once a mill pond and that we were now in the millrace and being pulled toward the opening where the millwheel once stood. Not knowing what kind of a drop it would be when we were spurted out the end of the chute, we backpaddled frantically. Didn’t do a bit of good. We knew we were goners.

Meanwhile, just below, a fisherman was enjoying a nice, quiet afternoon of fly fishing. All of a sudden, two guys in a canoe come shooting out above his head, yelling bloody murder, and slam down into the stream right in front him. Putting on those typical teenage we-meant-to-do-that expressions, we nonchalantly paddled on downstream. Hopefully, our witness was too busy recovering to notice how much we were shaking.

Normally, before people shoot the rapids, they walk the stream bank to see what’s coming up so they can plan their strategy. Even so, there are ravines they can’t see down into, and those are bound to be the worst places, something like the Chick-a-nout Narrows that my favorite humor writer, Patrick McManus, wrote about.

Once you stop laughing at my much-younger self, read on, because there’s a lesson in here for SMBs.

Surprises Should No Longer Surprise Us

With all the online resources today, there’s no excuse for not doing your homework before starting any new undertaking, be it a company startup you are contemplating or a new venture by your existing enterprise. But if we have learned anything from the economic crisis of 2008 and the COVID-19 pandemic, it’s that the only thing you can predict is that the unpredictable will happen at some point.

There are a couple of things you can do to mitigate unforeseen circumstances.

First Make Sure You Have a Solid Canoe

It all starts with careful planning for your business venture. Sure, you’re excited about your idea, but don’t be in a hurry; give yourself ample time to do thorough research. Start by finding the right business plan software for your model.

After you have a solid business plan, act like your own worst enemy and try to tear it apart. Imagine that you’re somebody you think is crazy for coming up with the scheme and try to knock some sense into that person. Then think like your competition and figure out ways to beat yourself. See any holes? Plug them. Then attack the plan again. And again, until it either crumbles or you can’t think of a way to defeat it.

Who does all that? I do. Not you? OK, so you’re a risk taker. I won’t be the one to tell you not to go for it. But ask yourself: are you just emotionally attached to your idea? Look for clues to this in the rest of your life: what’s your pattern? Ask trusted friends for their opinion on whether you tend to think objectively or get carried away. Better this kind of soul-searching now than what-have-I-gotten-myself-into angst later.

Paddle with People You Can Count On

This may be the most important element of all in being able to weather any storm. Here are a few things (some of them obvious) to look for in the track record of a potential collaborator. They should:

In my true story above, my brother was my partner, but a caveat is in order here: family members or best friends may expect you to believe in them no matter what, and if they don’t keep a cool head when the ride gets a little wild, it can put a strain on the relationship—and there can be a ripple effect to others in your circle. Not to mention that you’ll have one less person to hang out with when you need to get away from work for a while.

On the other hand, it can work out great—my wife has been my business partner for many years. Of course you’ll want to go into business with people you already know and trust, but I recommend using the same criteria for interviewing them for the position as you would use for anyone else. It’s a tall order, but be objective!

You have to adapt to every situation, not freeze. At the last second, my brother and I started paddling forward like crazy. If we hadn’t, we would not have flown straight out, we would have gone straight down, head first. The only solution was full steam ahead once it was obvious there was no going back. You have to recognize that conditions have changed, and go with it. Some resourceful businesses have retooled during the COVID crisis. Brick-and-mortar retailers that immediately switched to curbside pickup or home delivery when the lockdowns went into effect are surviving or even thriving; those who just froze are closing, many permanently.

So don’t chicken out, shoot the rapids!