Let’s All Drink to the First Post Office in America! 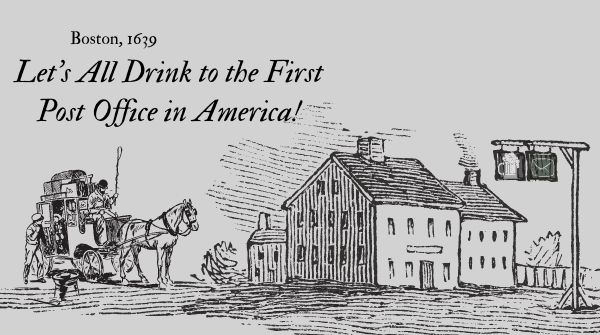 In early colonial times, people depended on traders, shopkeepers, friends, and Native Americans to carry mail through the colonies. But most correspondence from the settlers was between them and the countries they came from. The majority of it came from and was sent to England, Sweden, and the Netherlands. As the colonies grew, the first official notice of mail service was created to handle the increasing need for correspondence.

So it was that in 1639, The General Court of Massachusetts designated Richard Fairbanks’ tavern in Boston to be the first official repository of mail in America. Letters were to be delivered by clipper ships through a European chain of coffee houses and taverns, which were commonly used as mail stations.

Richard Fairbanks’ home was located between Washington and Devonshire Streets, just north of Water Street. But in addition to living there, Richard also sold “strong water” to anyone who could pay for it, so the first colonial “post office” was actually a tavern.

To be more precise, on November 6, 1639, the Boston court voted (word for word): “For preventing the miscarriage of letters; & it is ordered, that notice bee given that Richard Fairbanks his house in Boston is the place appointed for all letters which are brought from beyond the seas, or are to be sent thither, are to bee brought into; and hee is to take care that they bee delivered or sent according to their directions; and hee is allowed for every such letter 1 penny, & must answere all miscarriages through his owne neglect in this kind; provided, that no man shalbee compelled to bring his letters thither, except hee please.”

Now Richard was an influential man, and the same Boston court licensed him to sell “strong water” at his newly appointed postal facility. Colonists would have a drink while they put their overseas letters, along with the money to pay for the mailing service, in leather pouches hung on the walls of the tavern to be picked up by ship captains. Richard received 1 cent for each letter.

It was not a perfect system, not by today’s standards. Thirsty but destitute tavern patrons sometimes looted the pouches for drinking money.

But, according to some historians, this made Fairbanks the country’s first postmaster. It was certainly the first postal system legally sanctioned by the colonists.

Improvements to postal systems were slow to reach America, despite the fact that letter delivery systems had been operating in England for some time. Even so, mail delivery somehow plodded along until 1753, when Benjamin Franklin, postmaster of Philadelphia since 1737, was appointed by the English as a deputy postmaster general for all the colonies.

Under Franklin there was mail service between New York and Philadelphia three times weekly in the summer and once each week in winter. Mail between the colonies and England was also put on a regular schedule. Then the British fired Franklin in 1774 when they began to doubt his loyalty to England.

But the Continental Congress wanted the nation to have its own mail system and, in 1775, named Franklin as chief of the postal service at a salary of $1,000 a year. For a while the government was not sure it should operate a mail service, some arguing that the states should do it or allow it to be taken over by private enterprise. However, in 1792, Congress made the post office a permanent service. It was not long before postmasters were allowed to recruit mailmen and pay them 2 cents apiece for letters delivered to business establishments.

It’s no wonder 91 percent of Americans today have a favorable opinion of the US Postal Service. It is an institution so vast and so much a part of our history, our heritage, and our landscape that we may take it for granted, because overall, it has worked so well for 240 years. One thing is for sure, no one is taking the Postal Service lightly now that it’s being threatened. It’s like someone is trying to rip the shirt off the backs of Americans.

So, here’s a toast to the first postal service in America, and what it has become today. May it continue to service our democracy for another 240 years.

We’d like to hear what you think. Should we ignore the constitution and let private corporations take over the Post Office? Your comments are welcome below.

Want to share this image on your site? Just copy and paste the embed code below: